Are you interesting in knowing if your state is among the 15 states in Nigeria that may go bankrupt in next few years to come? Do you also want to know the top richest States in Nigeria? Well, keep reading.

Internal Generated Revenue is an amount a state makes in a given year. In the developed world like United States  and Britain, states are mostly found receiving little percentage from the federation account and depend majorly on Internally Generated Revenue in financing both annual capital and recurrent expenditures.

Nigeria has experienced an exponential growth in its economy in the time past. However, her natural resource is yet to be fully tapped. Many states in Nigeria have shown to contribute more to the federal government revenue as well as to their respective state revenue than others.

So, today I will consider the top richest state in Nigeria 2016 based on the Internally Generated Revenue (IGR) of each state. 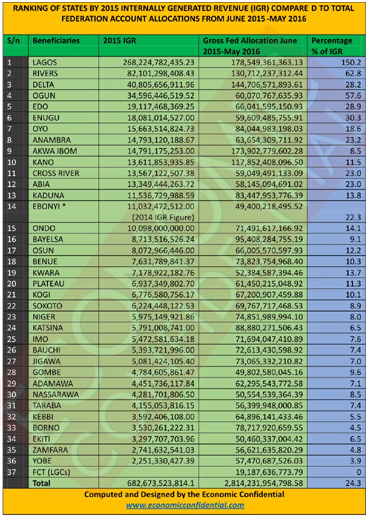 Lagos State retains its number one position in IGR with a total revenue generation of N268.22bn in the twelve months of last year.   Lagos State generates more IGR than 32 States combined. The latest report on IGR reveals that only Lagos State generated more revenue than its allocation from the Federation Account by 150% and no any other state in Nigeria has up to 100% of IGR to the federal largese. The report further indicates that the IGR of Lagos State of N268bn is higher than that of 32 States combined together excluding Rivers, Delta and Ogun whose IGRs are very impressive.